Sitemap (Use mouse wheel or keys) 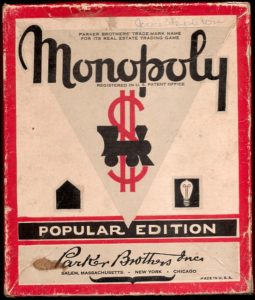 Charles Darrow was an unemployed salesman and inventor living in Germantown, Pennsylvania, who was struggling with odd jobs to support his family in the years following the great stock market crash of 1929. Charles Darrow remembering his summers spent in Atlantic City, New Jersey, spent his spare time drawing the streets of Atlantic City on his kitchen tablecloth, with found pieces of material and bits of paints, wood etc. contributed by local merchants. A game was already forming in his mind as he built little hotels, houses and other tokens to go along with his painted streets.

Soon friends and family gathered nightly to sit round the kitchen table to buy, rent and sell real estate, all part of a game involving spending vast sums of play money. It quickly became a favorite activity among those with little real cash of their own. The friends soon wanted copies of the game to play at home (especially the winners.) The accommodating inventor began selling copies of his board game for four dollars each. He then made up a few sets and offered them to department stores in Philadelphia. Orders for the game increased to the point where Charles Darrow decided to try to sell the game to a game manufacturer rather than going into full-scale manufacturing. He wrote to Parker Brothers to see if the company would be interested in producing and marketing the game on a national basis. The company turned down Charles Darrow, explaining that his game contained “fifty-two fundamental errors” including: the game took too long to play, the rules were too complicated and there was no clear goal for the winner.

As a kid I enjoyed this game and played it many times with family and friends.  The picture above is the same game my Dad played as a kid.  I still have his original game today and that was when the houses were made of wood, the piece were pewter and the cards were a heavy cardboard.   But no matter when you started playing Monoploy, it has always been one of the best selling board games.  This game teaches you about planning, saving, and spending money as well as, the strategy of finance. Lessons that are still important 83 years later.

Be the first to start a conversation